Anyone who has visited the rolling hills of Lancaster, Pa., will understand Carol Alleman's love affair with trees. The Tucson-based sculptor cites a childhood spent growing up among Lancaster's sylvan farmlands as the earliest inspiration for her botanical motifs. Today, her ornate bronze sculptures, crafted in an intricate Art Nouveau style, are replete with the verdant imagery of her youth.

Alleman left Lancaster to study art education at Pennsylvania State University, but the memory of her hometown's trees stayed with her. While dating a forestry major, she helped him prepare for a class in dendrology, the scientific study of woody plants and trees, and found the subject intriguing. “I felt a true identification. Something inside of me just loved learning everything about trees,” explains Alleman.

The scenery changed again when she and her family relocated to Tucson in the 1990s. Walks through the desert landscape prompted her to enroll in a class in Native American pottery techniques. “I liked the idea of going into the desert and digging your own clay, “ she says. Alleman discovered her artistic mode after mastering the ancient Native American technique of coiling. In this process, she layers long coils that are crafted into vessels.“It isn't a mechanical process,” she comments. “You are always touching and feeling the clay.” She points out that in many cultures the vessel has long held symbolic qualities of feminine energy. “It's the circular form - the repetition - no beginning and no end. It's a form that is always open to receive.” 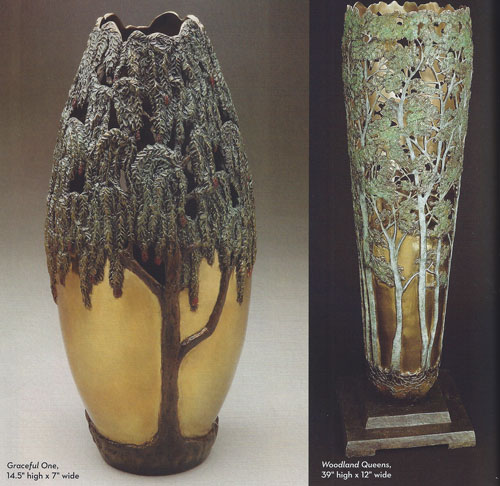 A mold is created from the clay vessel that will become the starting point for the lost-wax process of casting the piece in bronze. Alleman found that the metal's natural color and its verdigris patina with contrasting gold tones spoke to her affinity for trees, and she cast her first bronze in 2001. “They looked like 100-years-old trees - like ancient treasures,” explains the artist. She titled her initial series Tree of Life . These sculptures had an almost modernist, stylized representation, which, over time, has yielded to a more elaborate approach. “That mystical bronze forest has been growing ever since,” she offers.

Progressing from the initial clay vessel to the final bronze sculpture is a complex and time-consuming process, according to Alleman. Once the clay vessel is formed, she sketches detailing on it with a small needle. She then carves away clay that does not contribute to the completed form. This enables her to craft delicate open spaces. “Each opening must be cut out, refined and cleaned for each individual piece,” she explains. Then begins the lengthy process of lost-wax casting, which results in the final bronze sculpture. 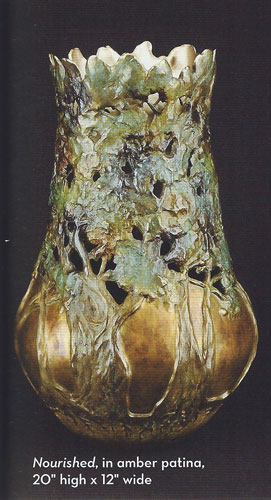 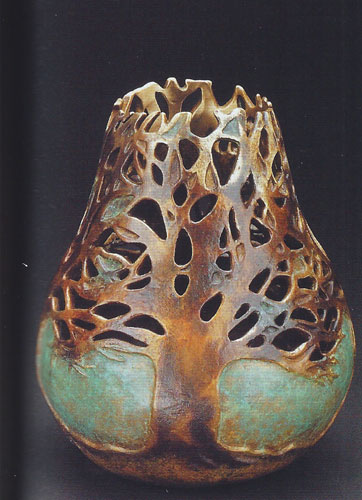 A regal quality emanates from the artist’s work, in one part from its subtle elegance and in another from the refined nature of the bronze’s patina. In the towering Woodland Queens, a 39-inch-high vessel, the artist encircles the basic form in a relief of 12 aspen trees. Sinuous branches weave in and out of the foliage on this statuesque sculpture. “That piece was inspired during a family holiday in Jackson, Wyoming,” notes Alleman. “It was summertime, so it was not the typical glimmering golden aspen leaves that drew me to them. It was their grace.”  The artist also was moved by the aspens’ uncanny regenerative powers. “Following a fire, they are the first to reappear, and grow faster than most,” she notes.

The majesty of Woodland Queens has not gone unnoticed. Shaun Alderman, director of Willow Gallery in Scottsdale, remembers the response of an antiques dealer and collector from Kentucky who specializes in bronze. “He said it was the finest bronze vessel he had ever seen anywhere in the world,” recalls Alderman.

Another work, a shallow bronze bowl titled Sacred Marriage, offers a tapestry of positive and negative spaces. “It symbolizes the marriage of opposites - night and day, light and dark, birth and rebirth,” explains Alleman. The bowl seems to extend naturally from the five-petal flower that blooms at its center. A closer look reveals the imagery of nature that abounds in her imaginative world: Butterflies, doves and owls play among the bowl's latticelike leaf work. Meandering vines unite the bowl’s symbolic images. The open carving draws in the viewer. The artist says the lacy-looking work makes the piece feel more alive and “filled with life and possibility.” 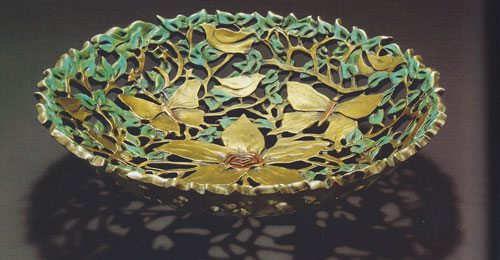 One of Alleman’s most recent works, a small bronze vessel decorated in poppies, reflects her careful dance between form and theme. Called Gratitude, the container bows out in the middle and then folds back inward toward the opening. Flower stems burst into variegated poppy forms surrounding the top third of the sculpture. The shape echoes the poppy’s daily habit of opening in sunlight and closing at night. Alleman points out that for her, the flower's routine is a natural symbol of gratitude, a “beautiful circle.”

Alleman adds further symbolism to her art by using a personalized system to determine the number of editions of her work. The sculpture titled Raven, for example, comes in an edition of 37 - the seven signifying the seven trees surrounding the vessel, the three emblematic of the trio of black ravens hidden among the foliage. Sculptures also display a mark that resembles a Z, which Alleman says represents the Spirit and accompanies her signature as a reminder that she doesn’t create alone. 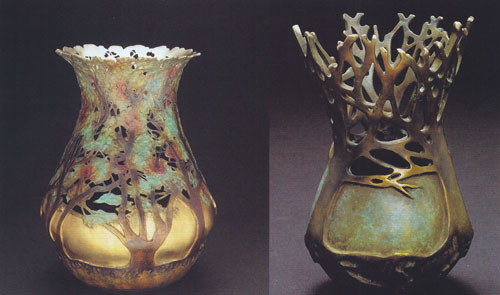 The artist includes a poem with most of her pieces, an ode to her inspiration for the sculpture. She says she hopes these writings will stir contemplation in others when they view her work. In addition to her degree in art education, Alleman pursued graduate studies at Lancaster Theological Seminary. She also has studied with various contemporary artists at the Scottsdale Artists School. 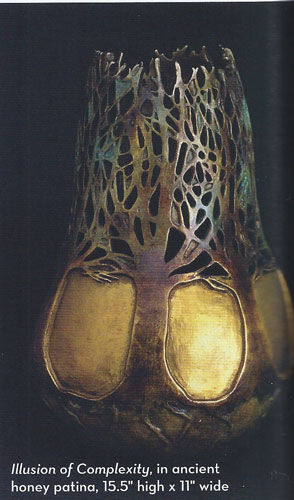 A member of the National Sculpture Society, Alleman has exhibited her work at shows across the nation and throughout the southwest . Her vessels appear in galleries from Laguna Beach, Califoria, to Pittsburgh, and she has shown work at the American Women Artists Annual Competition in Santa Fe, and at St. John's International School in Brussels,Belgium. In October, her works were exhibited in a solo show at Willow Gallery in Scottsdale.