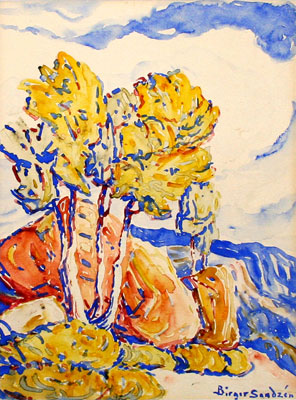 From the time he was ten, Sven Birger Sandzen knew he wanted to be an artist. Born in Bildsberg, Sweden in 1871, he was the son of a Lutheran minister. He began his art studies in Europe at the College of Skara in Sweden and graduated from there in 1890 to continue his studies at the University of Lund.

Having set his sites on the Royal Academy in Stockholm, Sandzen was disappointed to find no vacancies and a long waiting list of applicants. He then took classes at a new school which later became the Artists League of Stockholm. He studied there with one of Sweden's greatest painters and etchers, Anders Zorn. In 1894 he was accepted into a class in Paris taught by Aman-Jean, who shared a studio with Georges Seurat. There Sandzen was introduced to pointillism and impressionism which he used in his work from then until about 1910.

Also while he was in Paris, another student told him about an opening at Bethany College in Lindsborg, Kansas which he immediately applied for. Thus began a professorship of 52 years teaching at the college and educating the local villagers in the small towns nearby about art appreciation. He was appointed principal art teacher and head of the Art Department in 1899, a position he held until his retirement in 1946, after which time he was professor emeritus. While at Bethany he organized the first Swedish/American art exhibition.

He loved to travel and paint in one of his favorite places, Yellowstone National Park. By 1930 he had amassed a personal collection of over 500 western paintings and drawings. Sandzen visited New Mexico for the first time in 1918 and went back frequently to Santa Fe and Taos. The Taos Society of Artists made him an associate member in 1922. 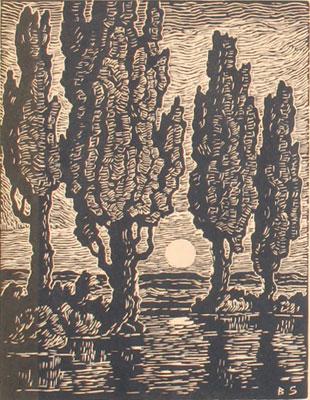 He went to Colorado first in 1908 and then in the mid 1920s taught classes at the Broadmore Hotel and Denver College. In 1928 Birger was invited to the Utah State Agricultural College (now Utah State University) and also to teach at Brigham Young University in the same summer. His brilliant color and thick impasto was now considered "Fauvist" and inspired many Utah artists to successful art careers.

With the onset of the Depression, Sandzen became a W.P.A. artist and wrote a book called, "With Brush and Pencil". In the 1930s he became the founder of the Prairie Printmakers Society which was one of America's most successful print societies. He was a multi-faceted artist, speaking six languages including Latin and sang solos with the nationally famous Bethany Oratorio Group. Birger Sandzen died at age 83 in 1954 in Lindsborg, Kansas. He was often said to be a painter in the style of Van Gogh. But he would always chuckle and mention that he did not even see a Van Gogh until 1924.

Exhibits and museum collections are too numerous to mention, but include Denver Art Museum; Goteborg Art Gallery, Sweden; Brigham Young University, Metropolitan Museum of Art; Uffizi, Florence; British Museum; Library of Congress and many others.