Billy Schenck in his studio in Santa Fe, New Mexico

Right around Labor Day in 1967, artist Billy Schenck found himself in Kansas City on a hot day.  The only place in town that had air conditioning was the movie theater.  Schenck was fond of the European directors at the time – Michelangelo Antonioni, Ingmar Bergman, Federico Fellini, Luis Bunuel, and others – and balked at the idea of seeing a Western film.  But he relented and ducked into a chilly auditorium showing Sergio Leone’s classic A Fistful of Dollars.  The rest is Western art history.

“There were no women, no cattle, no one interested in ranching.  Just these guys out there killing each other with very little dialogue.  Even the hero had a ruggedness to him with his poncho, a face that was about five days unshaven, and he rides into the movie on a mule,” Schenck says of the film from his studio in Santa Fe, New Mexico.

“What Leone did was he turned everything on its ear in that genre.  He added another dimension, one not thought possible before.  When I was younger I had seen Monument Valley and the Grand Canyon with my family, and the Acoma Pueblo with those great blanketed Indian figures.  But nothing changed my world quite like that movie did.  It was the greatest thing ever at that time in my life.  It was an earthquake, a tidal wave.”

Schenck took qualities of Leone’s Spaghetti Westerns – particularly his dramatic use of composition, the minimalist silhouettes and shapes found in the opening credits of many Leone films, and the nihilistic and also mythic themes of the West – and slowly began turning Western art on its ear with a pop art and illustrative style that is more Warhol and Lichtenstein than Russell and Remington.

His distinctive brand of Western art will be on view in Billy Schenck’s West” A Retrospective, opening April 1 at the Roswell Museum & Art Center in Roswell, New Mexico.  The exhibition is curated from Schenck’s own collection, which he has built form new works that leave the easel as well as old works that find their way back on the market.   The show comprising 45 years of his career, will feature pieces from all of the artist’s unique styles, including his half-tone dot works, caption paintings and colorful “paint by numbers” woks that originated with his interest in old Hollywood Western stills that he would project onto his canvas.  Schenck admits his methods, including his use of projectors and allowing art assistants to paint follow-up coats, might seem unsavory to more traditional artists, but he never thought of himself as part of the old school. 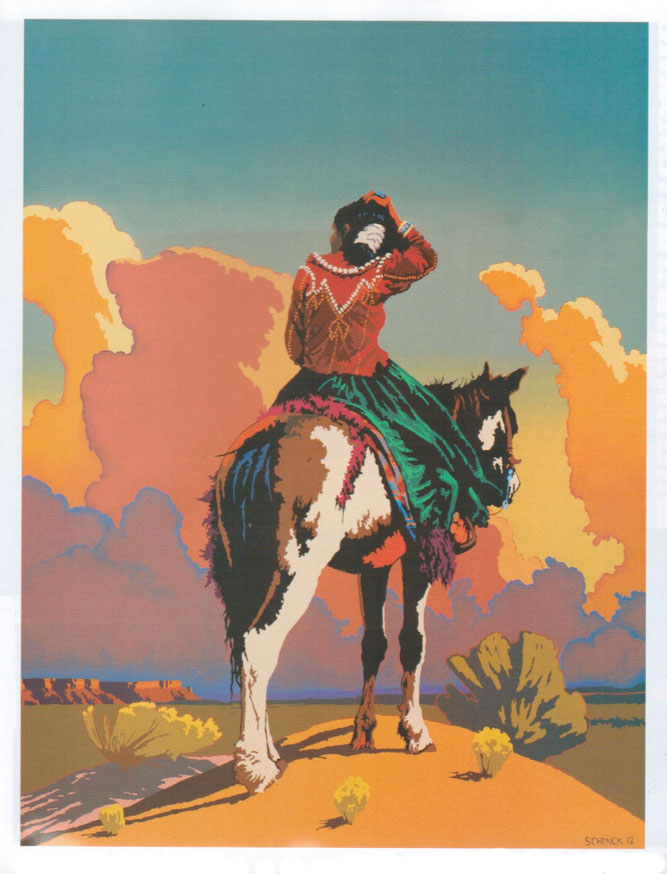 “A lot of people who collect Western art don’t trust my methods or my style.  They think that projecting the image is somehow immoral or wrong.  But in my mind it’s all fair game and fair play.  And then they find out I have help in the studio, but I immediately think of Leone.  A director is not doing everything on a film.  He has 10, 15, 30,100 people helping make the movie,” Schenck says.  “When I was starting out, the only Western art out there was by the Cowboy Artists of America.  I had a very dismissive attitude for them and their work, which was very conservative.  When I started working I knew I was writing a new chapter.  I know that sounds arrogant.  I didn’t qualify that I was going to make the art better.  I just wanted to expand what the genre was.”

Sara Woodbury, curator of collections and exhibitions at the Roswell Museum, says the Schenck retrospective celebrates, subverts and deconstructs the West.  “Billy has spent a career channeling colors, finding interesting subject matter and turning the subversive humor of pop art onto the West,” she says.  “His humor and his art also have a very sharp self-awareness.  He’s always asking, ‘What is the wild West?  And did it exist in history or is it a figment of our cultural imagination?’” 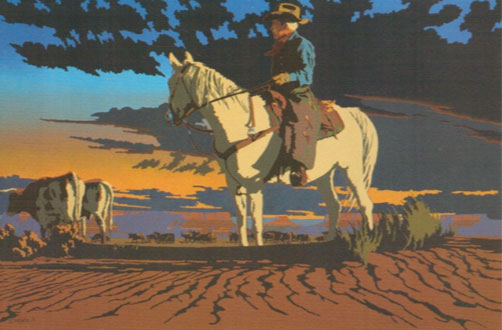 Woodbury adds that Schenck is not afraid to ponder the end of the West, which goes in stark contrast to what artists in the CAA and others believe, that the West will live forever.   “He does acknowledge its passing, but, as with all post-modern artists, when you say it’s the end of something, it never really is because you can go back and recontextualize it and open up a new conversation,” she says.  “And that’s something that Billy’s not afraid to do.” 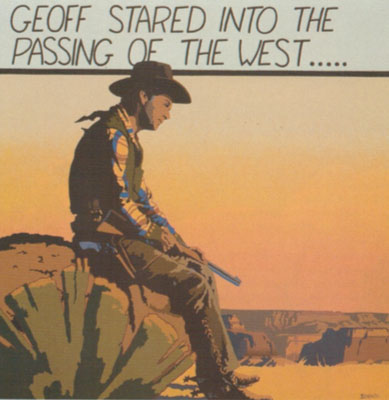 Kim Wiggins, another contemporary artist pushing the boundaries of Western art in Santa Fe, recently saw Schenck in Los Angeles and told him, “Western modernism is on the rise!”

“Billy’s approach is unique as he pulls from iconic, cinematic imagery utilizing pop art.  The result is quite dramatic and unmistakable.  Just watch the reaction of young people as they move through an exhibition containing Billy’s work.  Like a magnet, they are drawn to his visionary images,” Wiggins says.  “They feel an affinity to the work because it reminds them of something they have seen on their TV, laptop or tablet.  In my mind this is the definition of success as an artist.  Look at the young people – are you reaching them?  If the answer is yes, then you have found a way to keep the spirit of the West alive for the next generation of Americans.” 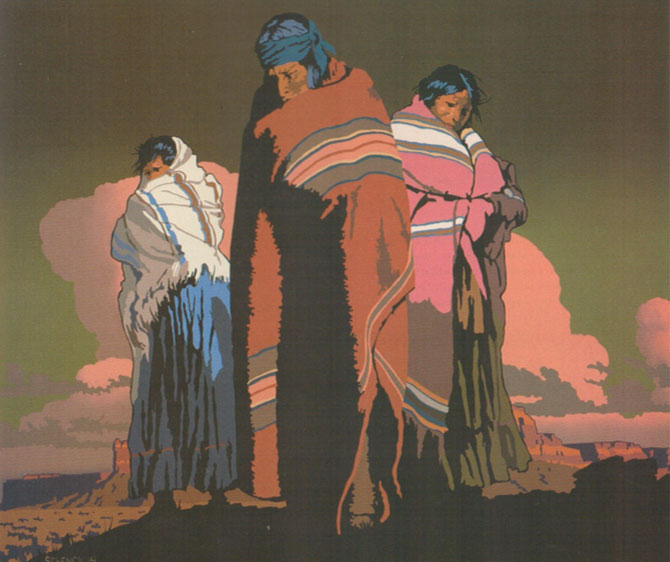 Like Wiggins, Schenck also thinks about the next generation of Western collectors.  He worried that if the genre isn’t pushed hard enough, that new collectors will pass it by.

“I get more crossover collectors today than I used to.  It used to be that the contemporary world didn’t trust me be cause of my subject matter, and the Western/traditional world didn’t trust me because the work was wonky and turned on its head.  But I managed to carve out a career,” he says.  “I just hope the next generation catches on.  I’m doing my part.  I’m trying to drag Western art into the modern age.  It has to stay relevant.  It has to.”