You might not expect one of the best-known practitioners of the western pop-art movement - which appeared in the 1960s hard on the heels of American pop’s leading lights like Andy Warhol and Roy Lichtenstein - to hem and haw about his origins. But ask Billy Schenck about his birthplace, and all you’ll get, after a few moments of charming demurral, is that he was born 65 years ago this month in “some unknown place in the rural Midwest.” 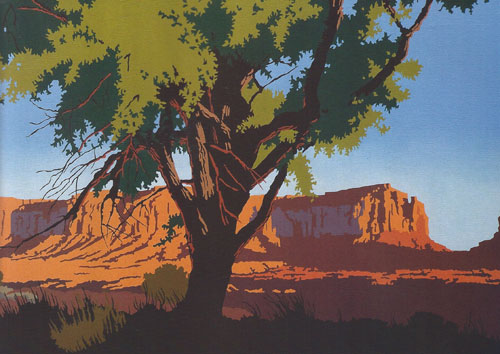 Schenck isn't being coy or disingenuous about his early years. Nope. Maybe there were just too many things from that time that he’d rather not talk about or reflect upon: a father who died by the time Billy turned 6; a stepfather who was “psychologically pretty abusive," provoking the youngster to spend most of his time staying out of his way; an early education that consisted largely of “getting in trouble for wasting my time drawing instead of taking notes.”

Those challenges, however, ultimately didn't stack up much compared to two very positive constants in his young life. One was comic books, which he loved to copy. “I was a cartoonist, constantly rendering Donald Duck and imitations of the characters in Mad magazine,” says Schenck, his voice filling with fresh awe as he reflects on those old passions.

The other reliable, sustaining factor was a very real connection to the American West, and to two places in particular that he will name gladly, quickly, and specifically. In August 1952, when he was barely 5, his family visited Acoma Pueblo in New Mexico. “To this day, I remember it so clearly,”he says. “It was on top of this mesa, with adobe buildings, and the Indians were dressed in white blankets. It felt profound to me. That was my first real connection to the desert, and it never left me.”

The other place was the town of Lander, WY. “My mother's brother published six newspapers in the state, and I spent my summers with him. I felt this real affinity for the high desert there. I’ve always loved its long, long vistas, the silence, the harshness. It’s where I felt the most at peace." From early on, those feelings of profundity and peace made the West more of a refuge and a spiritual home to Schenck than any nondescript heartland town could be. Although he wasn't consciously aware of it at first, that soul connection, intertwined with his love of rendering cartoon-style images, resulting in an artistic vision that finally began to emerge late in the summer he turned 20. 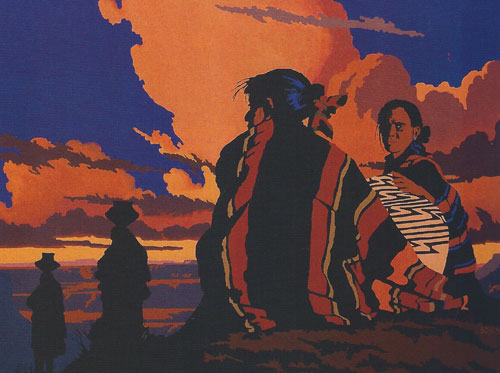 First, however, came Schenck’s decision to move beyond doodled cartoons to pursue a career in art. He enrolled at the Columbus College of Art and Design. But his lack of discipline, coupled with that school’s traditional approach to art training, led to his getting “thrown out after my second year.” By then, however, he was already primed for a change. At the college’s museum, he had seen an exhibition of Andy Warhol's Campbell’s Soup can paintings, turning everyday objects into monumental icons. Soon after, he had his first taste of the paintings of Roy Lichtenstein, with their captions and Ben-Day dots that re-created on a giant scale the tiny patterns of color newsprint in the Sunday comics. “I took their art very seriously,” Schenck says. “I thought their images were iconic. Boy, I thought these were seriously great paintings by great painters.” By February 1966, he was even working during spring break in New York’s East Village as a volunteer crew member for the Exploding Plastic Inevitable, a multimedia show produced by Warhol as a showcase for the cutting-edge band the Velvet Underground.

Freshly ejected from Columbus, he fortuitously landed at Missouri's Kansas City Art Institute, which proved a more hospitable environment for young artists headed toward the cutting edge. Perhaps understandably filled with angst from his difficult beginnings, Schenck's paintings at the time were inspired by the bleak, tortured portraiture of British artist Francis Bacon. But late in August of 1967, after Schenck had returned to Kansas City from summering in Lander, an art-school buddy who was a huge film buff uttered to him this fateful phrase: “You’ve got to see this western.”

At the time, Schenck says, “I was this hip, progressive guy, and I wasn't enamored of cowboy culture. To me, cowboys were redneck guys who were a direct threat to my lifestyle.” But, trusting his friend's cinematic tastes, he bought a ticket for A Fistful of Dollars, the groundbreaking “spaghetti western” by Italian auteur Sergio Leone, featuring a gun-toting drifter known only as The Man With No Name, played by a charismatic young actor named Clint Eastwood.

With its artfully framed extreme close-ups and distorted perspectives, the film rocked Schenck’s perceptions. “I made a decision that if Leone could take that radical contemporary approach to the genre of western films, I was going to take a contemporary approach to painting western subject matter,” he says. “I was done with that imitation Francis Bacon stuff.” Having moved to Manhattan after graduation, he began looking for inexpensive promotional stills from classic westerns. “Movies,” he explains, “were how I knew the most about the West.” Inspired by the pop artists he already admired, he blew up those images onto large-scale canvases, portraying them with a precision approaching photorealism while also simplifying them into hard-edged fields of bright, bold colors in what he humorously refers to as “paint-by-numbers imagery.”

Top New York dealers - including Ivan Karp, founder of the prestigious OK Harris Gallery - and collectors worldwide quickly took to Schenck’s works. His solo shows sold out, and he exhibited in group shows alongside pop superstars like Lichtenstein and Claes Oldenburg.

But almost as quickly as his career came together, says Schenck, it "began to unravel," with demand for his works diminishing. Part of that was due, no doubt, to the nature of the New York art scene a the time: An overnight sensation, by its very nature, is likely to be swiftly supplanted by the next new thing.  Schenck also thinks that, owing to his youth and inexperience, "I didn't manage things right."  And he feels that those New York artists with staying power took "a more objective, cerebral approach to their work, while the public realized I had a more romantic attachment to this imagery."  In short, he didn't play the Manhattan art-world's game.

So, in 1975 Schenck headed west to his spiritual home, "an environment that would accept my romantic attachment to western subject matter, even though I was doing it with a pop sensibility."  His works appeared in a group show at Santa Fe's respected Elaine Horwitch Gallery, and serious collectors of western art took notice.  Of course, there were other successful contemporary artists on the western scene to whom his works were inevitably compared, including the bold tribal portrait images of Fritz Scholder and the raucously cartoony Latino-inspired scenes of painter and sculptor Luis Jimenez.  "It was tough," he admits. "I had to start all over. I learned to be humble.”

In the process of gaining a humility that shines through in his kind, down-to-earth approach to conversation, Schenck has continued over the past three and a half decades to refine and deepen his signature style of painting - while establishing a secure home base in the Southwest, first in the Scottsdale area and then, for the past 16 years, in Santa Fe. A canvas like Looking for Sunsets exemplifies just how far he has come. It evokes an aura of nostalgia and longing for a passing way of life, deepening its emotional impact through its image of a lone cowboy on horseback, drenched in sunset colors, his figure framed by a looming storm cloud. 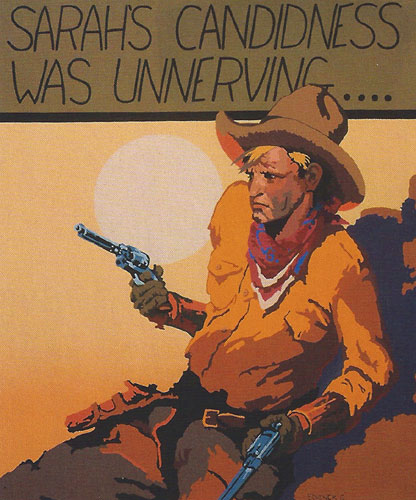 But Schenck's works aren't all about nostalgia. Since the early 1980s, he’s also been doing what he calls “caption paintings,” ironically juxtaposing images sourced from movie stills with captions presented in comic-book-panel style a la Lichtenstein. Sarah's Candidness, for instance, depicts a yellow-shirted, pistol-toting buckaroo, rocked back defensively as if in midbattle. “There’s a big difference conceptually between Lichtenstein and what I do,” notes Schenck. “I’m always making social commentary, often addressing the tension in male-female relationships.” 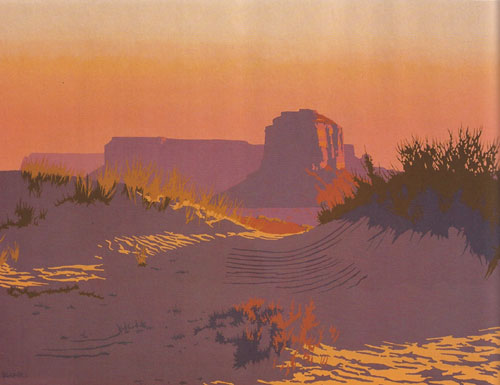 He’s also always on the lookout for new trails to explore. Dawn in the Sand Dunes, for example, represents a decade-long interest in landscape paintings and a foray into more pastel hues than pop’s primary colors. “The one thing I think can hurt artists,” Schenck explains, “is when they finally find their niche and then keep repeating themselves and quit exploring. That works for a while, but then you run out of inspiration. Fortunately, I get bored quickly, so I keep moving through my subject matter and my palette.” 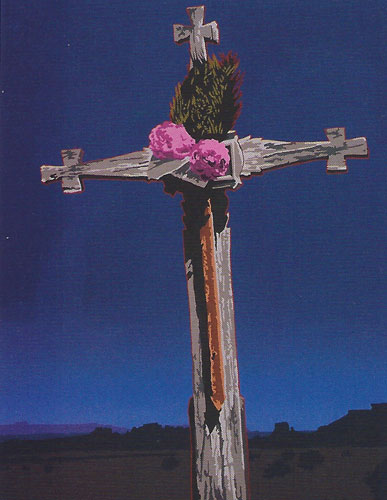 The steadiness Schenck has finally established in his career mirrors a stability he has achieved in his personal life  Today, he shares an 11-acre compound south of Santa Fe with Rebecca Carter, his partner and business manager of eight years. The studio where he paints is less than a minute’s stroll from their kitchen door. When he isn’t painting, he's looking after their six horses and 46 head of cattle. He's also gotten into the increasingly popular rodeo team sport of ranch sorting, which involves skillful on-horseback maneuvering of cattle into designated pens. Schenck won the 2009 master's division world championship in the event, followed up with the 2011 New Mexico all-divisions title, and he currently holds first place in this year's standings, with the season ending in early November.

You might say that, in every way, Schenck has at last found a place he can resolutely call his own. Its the perfect base from which he can securely portray the American West of his imagination. “It’s my own world,” he concludes, “and I explore every avenue."