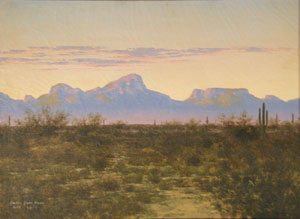 Audley Dean Nicols (Nichols) is known for his atmospheric paintings of the Southwestern deserts.

Nicols' mother was an art teacher and he took his first, informal instruction from her at home in Pittsburgh.  He received his formal training at the Art Students League and the Metropolitan Museum of Art in New York under Kenyon Cox and Henry Siddons Mowbray.  After briefly studying in Europe, Nicols established himself as an illustrator for magazines such as Collier's, McClure's, and Cosmopolitan.

Nicols first visited the Southwest in 1919 and exhibited his easel paintings in El Paso, San Antonio and Fort Worth beginning in 1922.  He moved to El Paso for health reasons, probably by 1927, and spent the remainder of his life painting landscapes in the low deserts of West Texas, New Mexico, Arizona, and California.

Nicols sold his painting of El Capitan mountain to the Santa Fe Railway which released it as a lithograph.  He installed a six by seven foot canvas, The Western Desert, in the Gadsden Hotel in Douglas, Arizona, and completed mural projects in public buildings and civic clubs in El Paso and Pittsburgh.