Art of the West Exhibition 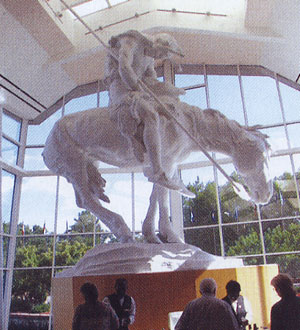 The National Cowboy & Western Heritage Museum presents the inaugural exhibition of paintings of the West from the Bank of America Collection through May 10, 2009. Titled Art of the West, this temporary exhibit represents only a small portion of the bank’s extensive collection of paintings, prints, sculpture, photographs and art objects. 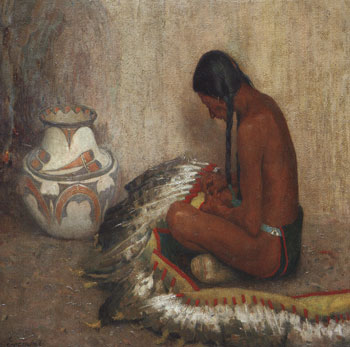 “We’re proud to bring this important collection of Western art to the National Cowboy & Western Heritage Museum. Sharing these works with the public not only benefits local residents culturally, it also helps strengthen the community financially, by supporting an institution that serves as an economic anchor,” says Tony Shinn, Bank of America Oklahoma City market president. “As out nation looks toward its future during this historic time, it’s now more timely than ever to look back on its history and be reminded of our country’s beginnings in the days of Western expansion.” 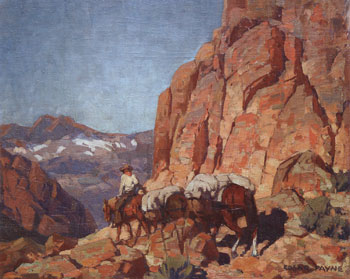 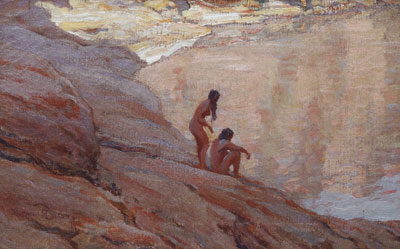 “Some of the works have never been seen in public, or at least not on public view in recent time,” says Cunningham. The exhibition offers a mini lesson in art history as applied to painting in the American West. It also provides an opportunity to see the various artistic developments that occurred in each painter’s work.”

The artworks are divided into sections: Discovery Through Time, Iconic West, Regional West, and Moving Toward Modernism. The exhibition starts with Caravan en Route, a period piece by Alfred Jacob Miller that records his 1837 journey to the annual Rocky Mountain fur trappers’ rendezvous into what is now Wyoming. On the opposite end of the art historical timeline, the show closes with Raymond Jonson’s progressive vision; his Colorado landscape, Autumn Snow at Boulder Creek (c.1917), illustrates his early work before he moved into non-representational painting. 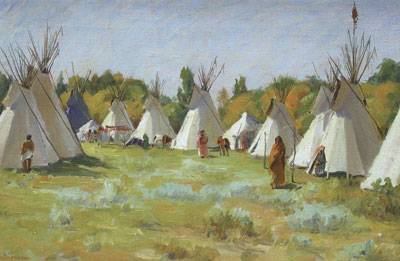 To create a lively, “user-friendly” exhibition, the interpretative text written for Art of the West combined painting analysis and art historical discussion with episodes in Western history, notes on architectural and natural landmarks, and the artists’ words regarding the painting process or the Western landscape and its inhabitants. 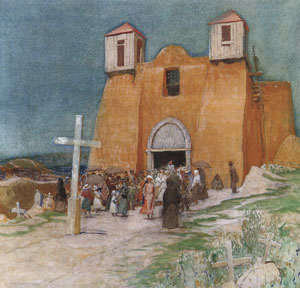 “It became clear this is an eclectic collection that invited a ‘moment in time’ approach on how the land and people of the American West affected the artist, and also what effect the artist had on the landscape and culture he portrayed. When a painter memorializes a particular time and place, in turn, the resulting painting commemorates both the artist and his subject. It’s a kind of reciprocity, interesting to look at,” explains Cunningham. “Interpreting the show gave us an opportunity to introduce art historical terms and movements in a way that’s easy to understand. We used examples from the painter’s lives to show that artists are people too.”

Like many of these deceased masters, Frank Tenney Johnson began his career as an illustrator before becoming a painter. An ideal example of Johnson’s illustration work can be seen in Journey by Canoe. 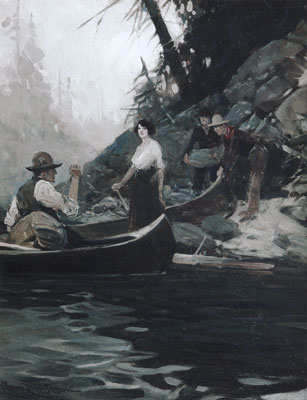 “What’s interesting in that painting, if you squint your eyes while looking at it, you’ll see light, dark and middle tones. It was that balance between contrasting lights and darks that really helped to produce high quality magazine or book illustrations,” says Cunningham. One of five Edgar Alwin Payne pieces in the exhibit is titled Over the Hump.

“This is one of Payne’s typical motifs – a rider leading a packhorse through a mountain landscape. He painted so much in the Sierras that a lake was named for him,” notes Cunningham. “Payne uses loose, free brushstrokes that are almost modernistic and then he really outlines the carefully rendered figures and makes them stand out against the landscape. The way he captures the light and ruggedness of the high mountains, it’s just an exquisite piece.” 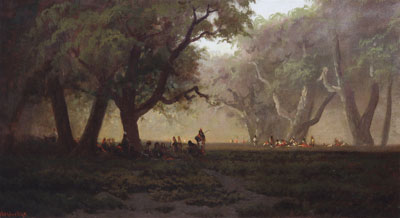 Additional highlights of Art of West include between three and five small works each by Edgar Alwin Payne, Joseph H. Sharp and Oscar E. Berninghaus.

Art of the West provides collectors and admirers of Western art with insight into the progression both in the artist’s work and the art historical timeline.

“It’s an opportunity to develop a discerning eye because you can compare small paintings and studies with larger, finished paintings that the artist painted for competition purposes,” says Cunningham. “Ultimately, I’d love the viewers to take away a joyful understanding of the paintings in Art of the West – and of art in general – in a framework they can sort of hang a cowboy hat on.” 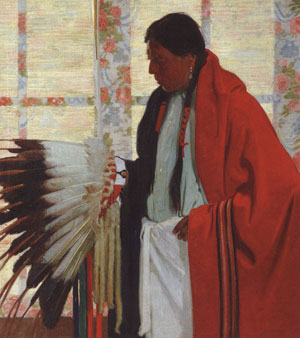