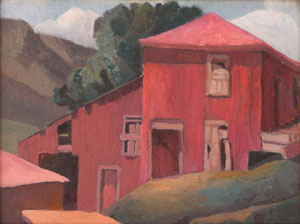 Anna Elizabeth Keener (Mrs. Louis Raymond Wilton) was born in Flagler, Colorado in 1895, but spent most of her childhood in Dalhart, Texas.   The beginning of a long career in academics began with first earning a BFA and BA degree from Bethany College in Linsborg, Kansas.  During this time she attended summer sessions at the Art Institute of Chicago, Illinois.  At Bethany College she was also an assistant to Birger Sandzen, who was at that time a professor of block printing.  She later referred to him as one of her most important teachers.

During WWI Keener served as a clerk for the Navy in Detroit and took evening classes at the Detroit School of Design.  When the war ended she taught public school in Arizona and Kansas, attending evening classes at the Kansas City Art Institute in Missouri in 1923.  That same year she authored the book, Spontaneity in Design.  In 1925 she moved to Alpine, Texas to teach art classes for the next two years at Sul Ross State Teachers College.  She then moved briefly back to Dalhart before moving to New Mexico to teach school in Red River, Ojo Caliente, Las Vegas and Gallup.  She painted a mural in Gallup at the McKinley County Courthouse. 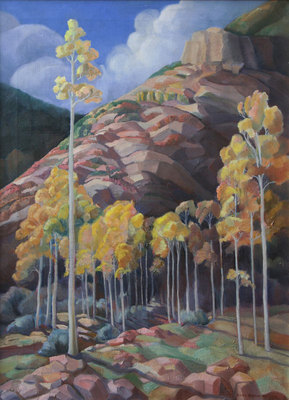 Anne's next destination was Mexico City in 1941 where she studied and painted before moving to Portales, New Mexico as the head of the art department oat Eastern New Mexico University - a position she held for twelve years.  During this time she was also taking classes from Colorado State Teachers College in Greeley.  In 1951 she received her Masters of Arts degree from the University of New Mexico, Albuquerque.  She went back to Mexico City in 1953 for more studies.  In 1954 when she retired from Eastern New Mexico University, she moved to Santa Fe and actively began jurying exhibitions and painting her own art.  She eventually held memberships in the Art of America Society, American Federation of Arts, American Artists Professional League, International Institute of Arts and Letters, National and New Mexico Art Education Associations, Southern States Art League and Western Art Association.

In 1962 she studied at the California College of Arts and Crafts in Oakland.  She was one of the organizers of the New Mexico Arts Commission and a member of Artists Equity, Inc. working for legislation to establish a National Council of the Arts.  She died in Santa Fe in 1982.