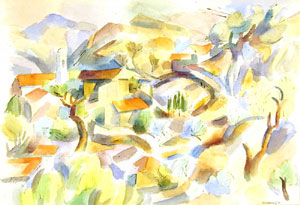 Andrew Dasburg was one of the leading Modernists in New Mexico for sixty years. A student of Robert Henri, an acquaintance of Matisse and a contributor to the famous 1913 Armory Show, his artistic credentials are sterling and his following devoted. An opinionated and ambitious man, Dasburg made an impact on both American art in general and Southwestern art in particular.

Born in 1887 in Paris, Dasburg emigrated to America with his widowed mother in 1892, moving to Hell's Kitchen in New York City. In 1902, one of his teachers, sensing a real talent, brought him to the Art Students League and negotiated a scholarship for Dasburg there. He studied there until he felt constricted and moved to the New York School of Art, where he studied under Robert Henri, whose joyful refutation of enduring artistic principles was passed on to his young protégé.

1908-1910 were spent in Paris, where Dasburg came in contact with the great artists of the day, developing a particular affinity for Cezanne, who would serve as his guiding inspiration for the rest of his career. While in France, Dasburg had a chance to meet Matisse in his studio and watch him paint, and was impressed by his use of line and form to create pieces that had a stylistic flair without seeming forced or contrived. Impressed and inspired by the work of the leading European modernists, Dasburg returned to the United States, where he moved to Woodstock and lived with the leading artist of the American Synchromist movement, Morgan Russell.

Dasburg's work became quite abstracted after his arrival in Woodstock. By the time of the Armory Show, he was working in an almost totally abstracted style. The phase didn't last, however, and by 1916 his work had reached a sort of compromise between total abstraction and cubism that would define most of the rest of his career.

In 1918, Dasburg traveled to Taos for the first time. If he had harbored thoughts of further abstraction, they were obliterated by the New Mexico landscape, which dazzled him with its light, people and natural surroundings. Dasburg was one of the principle artists amongst the modernists working in New Mexico, and his style is oft-mirrored in the work of others. Blocks of bold color are held together by sinuous lines in a mildly cubist style. Dasburg worked in watercolor, pastel, oil and prints, often switching mediums when he was beset with an artistic block or a bout of depression. 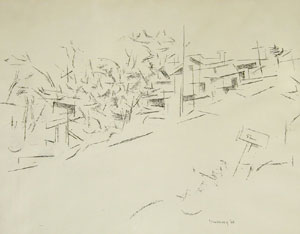