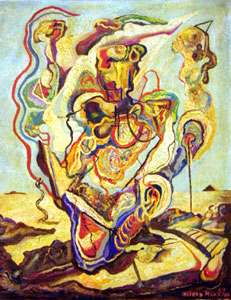 Alfred Morang grew up in Maine, learning to paint from the various artists who summered near his home. His formal education in the arts consisted of a MFA from Fremond University, where Alfred Morang studied in Caroll Tyson and Henry Snell.

Alfred Morang's early career was marked by an artistic restlessness that drove him to create in many media, not all of them visual. While living in Boston in the 1920s, Alfred Morang studied art and music, illustrated books and magazines, gave music lessons, and began work on a number of works of fiction, some of which would be published in the 1930s.

In 1938 Alfred Morang contracted tuberculosis, which prompted a move to Santa Fe, NM, a climate more hospitable to a man in his condition. While he recovered, he focused primarily on painting for the first time, with marked success. Along with Raymond Jonson, Emil Bisstram and William Lumpkins, Morang founded the Transcendental Painting Group, which strived to paint what could not be rendered visually.

The flowing, stretched iconography of Alfred Morang's paintings is vivid and challenging still today. His development as an artist continued until his tragic death in 1958 in a fire that burned down his Canyon Road studio.