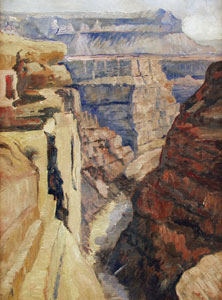 Groll painted the landscape of the Atlantic coast and then headed west to Arizona in 1904 with ethnologist Professor Stuart Culin, who went west to write a paper about Indian games.   While on this trip Groll was introduced to Lorenzo Hubbell, an Indian dealer who owned the Ganado Trading Post.  One of the scenes Groll painted on that trip won a gold medal at the Pennsylvania Academy of Fine Arts in 1906.  After winning this award he wrote to Hubbell saying his western paintings, "have made a decided hit, both artistically and financially; in fact, my visit to the Southwest has been my lucky stars." 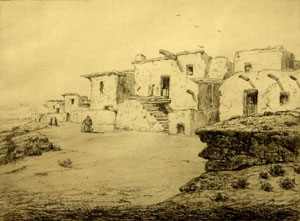 In 1906 he went to visit New Mexico with his friend William Robinson Leigh, who he had met while studying in Munich.  The paintings done at the Laguna Pueblo of the vast landscape and towering clouds impressed the Indians so much that they called Groll Chief Bald-Head-Eagle Eye.  He became known for his oil paintings that were sometimes abstract and sometimes mixed media with crayon and scuffed on to make a more textured surface.  He was inducted into the National Academy of Design in 1910.  Although he maintained his studio in New York City and was well-known in the East, he frequently went painting out west to give his collectors the desert subject matter that was much sought after.  His work was included in the San Francisco Panama-Pacific Exhibition in 1915.

His work is in museum collections at The Fine Art Museum of San Francisco, Metropolitan Museum of Art, Brooklyn Museum of Art, Richmond Art Museum, and the Smithsonian Institution among others. He died in New York City in 1952 at age 86.