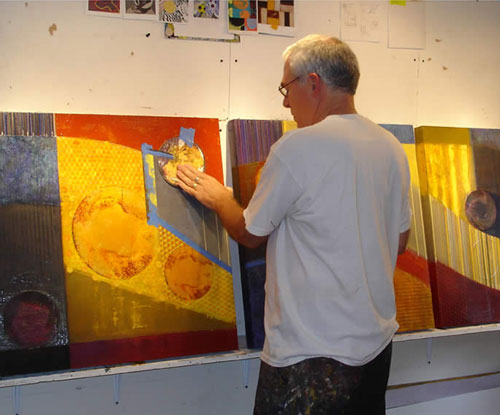 It's our perspective on life that gets us through the day. It can help or hinder us with adjusting to new circumstances and in dealing with the mundane details of living.

As you look at these paintings you'll become aware of uncertainties and simultaneous states within them. Flat becomes round. Objects at rest can also be in motion, and can be cosmic or molecular in scale. Patterns emerge from chaos. The seemingly simple is found to be infinitely complex.

Inspired by science, filtered through personal experience, and extending contemporary art practices, these are abstractions of how the world works. Back when the world was flat, people were at the center of an unchangeable clockwork universe. The viewpoint today is radically different. Today, the center depends on where you're standing. Things not only change, but can be different things simultaneously. And instead of predictability, chance rules the universe. Matter is energy and motion is relative. Perspective changes perception. Accepting one view as right does not make the opposite view wrong. 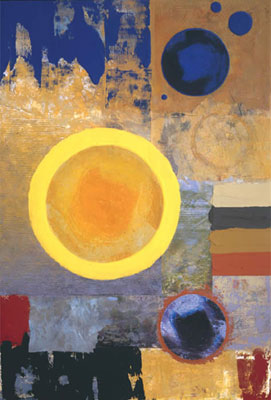 I use the language of my graphic arts background - printed papers, halftone dots, digital scans - to tell a story of particles and waves. An active, dimensional surface lets the painting live and change with different viewpoints.

As much as I enjoy the beauty and emotion that is expressed through color, texture and shape, I want to make paintings in which these elements also communicate an idea.

The Probabilities paintings are created with a mixture of planned and chance events - the same process that brought you here to this point in time to be reading this. They ask for participation on your part and encourage open, flexible thinking by picturing a universe than is much more than it appears to be if we can see it from new perspectives. 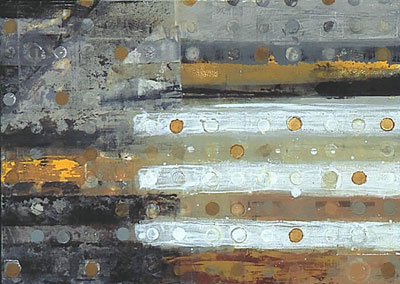