In celebration of our 40th anniversary, we salute these artists, dealers, and others who have shaped the western art world.

Southwest Art celebrates four decades of publishing this month. The magazine first appeared in May 1971, an since then it has chronicled the art scene in the American West through good times and bad. It has evolved from an early focus on Houston to its current scope, encompassing everything from Texas to California, from the Southwest to the Rocky Mountains to the Pacific Northwest. And as art-world tastes have shifted – from cowboy and Indians to realism with a contemporary influence – Southwest Art has covered it all, championing the best artists along the way.

In the following pages we salute some of those top artists, who have set standards for quality in the art world. And we salute other essential members of the art community who have made an impact: the gallery owners, show organizers, membership organizations, scholars, and more who have made, and continue to make, enormous contributions to the field.

It almost goes without saying that an attempt to select just 40 prominent people is nearly impossible and highly subjective. There are countless others who could have been included on these pages. But we think you’ll agree that everyone mentioned here has played an important role and made a difference.

There’s just one crucial person missing from this group: you. Without art collectors and art lovers, there wouldn’t be an art market or a magazine. And so we celebrate the prominent people in this issue, we also salute you for your appreciation of the artistic creativity that makes the world a brighter place. – The editors of Southwest Art. 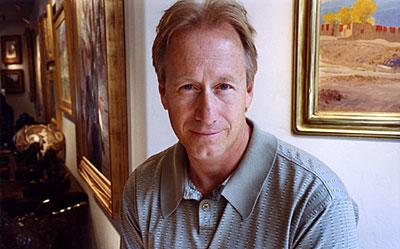 Distinction: Sublette is a prominent dealer and expert in numerous categories, including the work of Maynard Dixon, Navajo rugs, and today’s western artists. He is also a leader in the use of online technology in the art world.

When did your gallery open? I opened Medicine Man Gallery in Tucson in 1992 and in Santa Fe in 1996. Our website, www.medicinemangallery.com, launched in 1996 as well.

What are some of the biggest changes you’ve seen in the art world during your career? The world has gotten smaller via new routes of communication. No longer does a gallery have to focus only on its local market; we are now a global art community.

What trends do you see in your market? Artists will become more involved in selling and promoting their art. Galleries who are responsive to these changes will flourish; those that aren’t will not be around for your big milestone issue.

How have collectors’ tastes changed over the years? I see the overall art world and collectors gravitating toward more contemporary art and away from strictly representational. Santa Fe is a good example, where there are a large number of contemporary art galleries on Canyon Road that didn’t exist 10 years ago.

How has Southwest Art magazine contributed to the careers of your artists? I have heard numerous times over the years, including very recently, that the reason people started collecting art to begin with was “exposure to Southwest Art.” The magazine has directly impacted countless collectors.

What accomplishment are you most proud of? I like to think that a reputation for quality art and artists and ethical dealings for 20 years in the art business would be my greatest accomplishment.

What’s the most unusual thing, strangest story, or funniest moment that’s happened in your gallery? I once set out a picture of a large Maynard Dixon painting to a supposed collector, who then showed it to a dealer and then another dealer. I then received an image of my own painting, offered to me for sale at $200,000 more than I was offering it for!

If you could pursue only one of your many artistic interests, which would it be? I do hope to leave some legacy when it comes to Maynard Dixon’s artwork. We would like to continue to promote his life’s work.